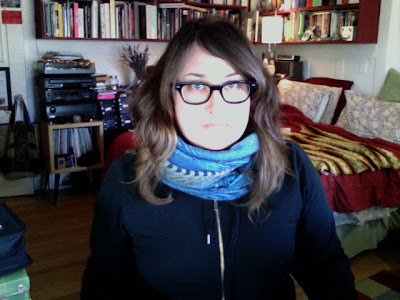 Judith Baumann is the latest artist here on Life, the Universe and Art. Hailing from Buffalo, NY and currently residing in Olympia Washington, where she teaches Print Media at Evergreen State College. She is also the Gallery director at Northern: An Olympia All Ages Project, Olympia, Washington a non profit gallery that she helped open in May 2009. Judith's work uses digital and Serigraphy printmaking techniques to draw attention to pop and consumer culture through a lens of humor that juxtaposes a critical cultural critique with mass media. She has been the recipient of a grant for the Vermont Studio Center as well as Virginia Museum of Fine Art Professional Fellowship Grant Recipient. Her exhibitions include Washington Project for the Arts/ Corcoran, Washington, D.C., Stefan Stux Gallery,New York, Boston Museum School, Massachusetts, Delaware Center For the Contemporary Art as well as The Basement Gallery in Knoxville, TN. 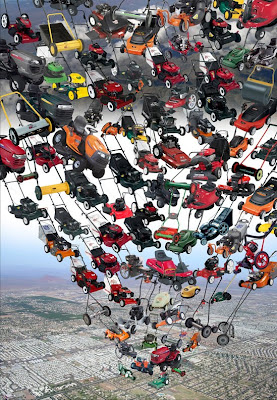 1. Your work, and in particular your body of work “When Appliances Attack” uses an overt and an almost slapstick humor. How do you see this functioning for your viewer? Is there a purpose for the humor for you? What tradition does this come from?

“When Appliances Attack” was the body of work I created for my graduate thesis show at Virginia Commonwealth University, so I think of it more now as a kind of reference point for my current work. Everyone loves humor and wielded well, humor and sarcasm are powerful weapons. The saturated colors in the majority of the work, with the exception of the more subtle washing and drying machine triptych, are inviting and fun. I can’t take credit for that – it’s contemporary industrial design… bright, shiny, plastic stuff. For me, humor makes work approachable. The series is critiquing the settling and taming of inhospitable tracts of land in the American Southwest. The environmental and ecological impact of essentially colonizing these arid areas, depleting water sources and solely relying on the transportation of all goods and services to the region is astounding and unsustainable. Using humor is the only way to address such a statement in a visual way without using a crowbar on your viewer’s head. Humor and satire have been a tradition of subversive artistic expression since before the printing press, although in more clandestine ways. I think satirical, funny art is inherently the people’s art. 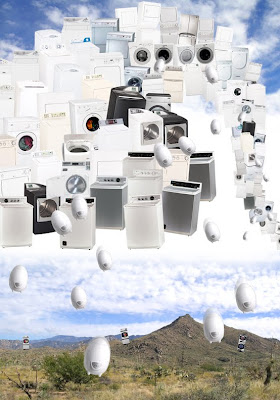 2. In “When Appliances Attack” you have massing of the objects that creates a unique aesthetic within the body of work. What was your methodology? And what was the ideology behind the massing?

The massing was meant to underscore the amount of variations in the same basic appliance for a given year. All of the images of vacuum cleaners, lawn mowers and washing and drying machines were collected from online retail websites between October 2004 and March 2005. How many options does an average vacuum cleaner really need to have? The formations of the appliances were influenced by vintage science fiction posters, The Lord of the Rings trilogy and my fascination with the act of collection and hoarding. The ubiquitous nature of the appliances – the exact same model can be purchased throughout the country – highlights the homogenization of America, the growing dichotomy between the nation’s upper and lower middle classes (not to mention between the truly rich and truly poor), and our fascination with stuff that may or may not have any value in our particular geological region (lawnmowers in the Southwest). 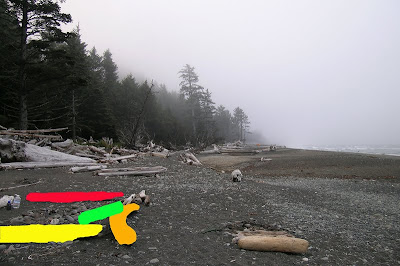 3. In your “Travels with John” body of work, you again employ humor to engage the viewer. However, the way the humor functions is very different than that in “When Appliances Attack”. What is this difference and how did this develop?

The “Travels with John” body of work, which is in perpetual development it seems, came out of a lonely, isolated stretch of time for me. During this time, I re-read John Steinbeck’s seminal “Travels with Charley,” in which the author travels the country with his standard poodle, Charley, in search of ‘real America’ and the people living there. Almost 50 years since the original publication date, the novel mirrored my growing concerns with the problems facing our country: the rapid development of land, depletion of natural resources, mass media’s influence over culture, the control of big government over the nation’s decision making bodies, and deforestation and its environmental impact, among many other political and social observations relevant still to the 21st century. Like Steinbeck, I have perpetual wanderlust and a great love of this country. I decided that I needed to start some sort of documentation on all my travels, weekend or otherwise. First, though, I needed a traveling partner. Since I don’t have a dog and I’m more of a solitary adventure seeker, I decided an imaginary roadside companion would be best. I thought of artists I admired and wanted to learn from, who I would want to imagine having long conversations in the car with, and who I could start to imagine seeing our travels through their eyes. John Baldessari was my first choice, his name also played nicely into the John Steinbeck reference. We did a test drive of course, to see how we would get along in my tiny hatchback Hyundai accent. We had a few quibbles but mostly it just felt… right. Therefore, the documents of my travels don’t simply reflect my humor, but the imaginary combination of my humor with John Baldessari’s. 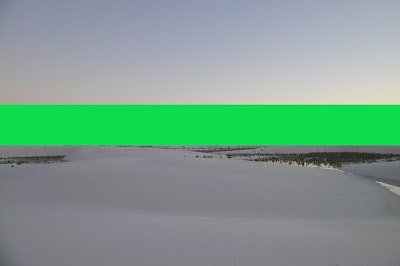 4. “Travels with John” plays with the idea of absence and presence in its aesthetic appearance. What was your methodology? Is the aesthetic informed by your content? And how do you think John Baldessari would respond to the work?

The whole series really delves into my over-active imagination, which of course is based on absence. “Travels with John” is the second in my “art fan art” series, the first of which was a copulation between Dave Hickey, Google and his theories surrounding art criticism. The images in “Travels with John” reference Baldessari’s graphic portraits and film stills in which he replaces recognizable characteristics and visual content with flats of varying bold colors. I apply John’s perceived aesthetic to the landscape in reference to time and physical space. In the deserts of New Mexico, horizon lines are obliterated by swaths of green, almost making sky and sand indistinguishable. On the wild coasts of Washington, haystack formations are blocked out of the landscape by reds and yellows, hinting at the eroded horizon line thousands of years from now. In Northern California, Redwoods are obliterated, wildlife is extinct and the tides deposit candy colored pollutants on the shores. All original images are taken in true snapshot fashion, altered later through digital imaging and screen-printing. Again, the tongue in cheek nature of this series (and its art-world reference) makes the political and environmental content digestible, if not immediately apparent.

I would hope that John would chuckle. 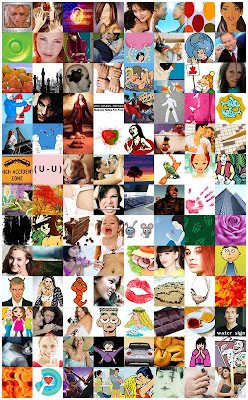 5. You are trained as a printmaker and teach printmaking, but your work encompasses an extension into other media, specifically I am referring to your work “Blog-Thing Self Portrait”. What are the differences in how you approach printmaking and digital media in your work? Is there a place where prints and digital media meet ideologically, and methodologically? What are the differences for you as a maker, which is more fulfilling as an artist and why?

When printmaking and digital media collide, the term printmedia is conveniently conceived. That’s the realm I work in. I do not consider myself a ‘printmaker’ nor do I actively use traditional printmaking in my work. All methods of printmaking were created to disseminate information, from the earliest relief printing to typesetting, intaglio and lithography. As each of these commercial mediums were surpassed by another, artisans and artists adapted the techniques to create new, unique editions of art on paper, for the purpose of fine art alone. Digital printing and the advent of the Internet have now usurped traditional printmaking’s ideological role, questioning even the relevance of the term ‘edition.’ Traditional printmaking is extremely process oriented and technical in nature, which for me often hinders conceptual development in image making, unless that image directly relates to the process itself. When teaching, I often talk about ‘image appropriateness’ for the technique I’m giving instruction in. Intaglio has its own aesthetic, as does crayon drawn images on litho stones, and halftone images in serigraphy. That’s not to say that one cannot push the boundaries of those mediums, or even combine them but in general, highly detailed stencils just don’t look good as aquatints. In my work, I combine digital photographs, internet based imagery and graphic design standards. I compose on the computer (my ‘matrix’) and digitally output through high quality ink jet printers (my ‘press’) on traditional fine art rag papers (my ‘substrate’). Just as much technical skill and preparation go into my image-making as traditional printmaking, and I will argue with any die hard printmaker who questions the attention to detail, patience and problem solving ability that using digital inkjet printers entails. Currently, working in the digital realm just makes sense with the visual components and concepts I’m using as an artist. 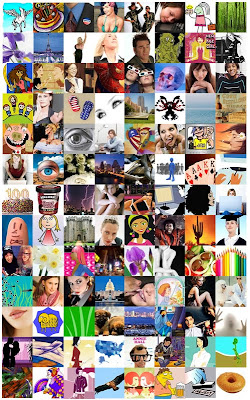 1. Friends finding and fearlessly following their own life’s trip.
2. The DIY ethos
3. “Walden” by Henry David Thoreau
4. My students, when they work hard, make mistakes and learn from them.
5. All the radical, feminist women in Olympia, Washington
6. Andy Warhol
7. Summer in the Pacific Northwest
8. “The Americans” by Robert Frank
9. Growing up in Buffalo, NY
10. Joel Sternfeld’s “American Prospects,” Alec Soth’s “Sleeping By The Mississippi” and Bill Owen’s “Suburbia.”

What are your current projects?

My current project includes abstract CMYK serigraphs of famous explosions on film post 9-11 and hand drawn halftone-pattern landscapes. John and I will also be traveling to The Spiral Jetty over spring break. John read a post on Craigslist’s rideshare that Robert Smithson needs a lift to Olympia. 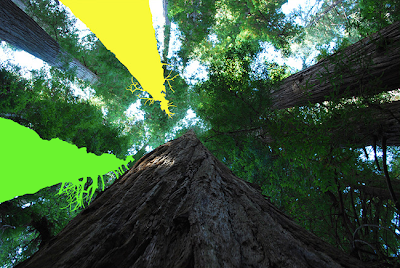 Understandably your article helped me truly much in my college assignment. Hats high to you dispatch, will look audacious in behalf of more interrelated articles soon as its anecdote of my favourite subject-matter to read.

YES!!!! So happy that this blog is up and going again- welcome back :)

I really liked the article, and the very cool blog

This is a blog where artists have conversations about art. Investigating, process, media and concepts, Life, The Universe and Art joins the conversation of what it is to be an artist. This blog is curated and edited by Belinda Haikes. Contact me at belhaikes @ yahoo dot com for questions, comments or suggestions or visit my website at belindahaikes.com